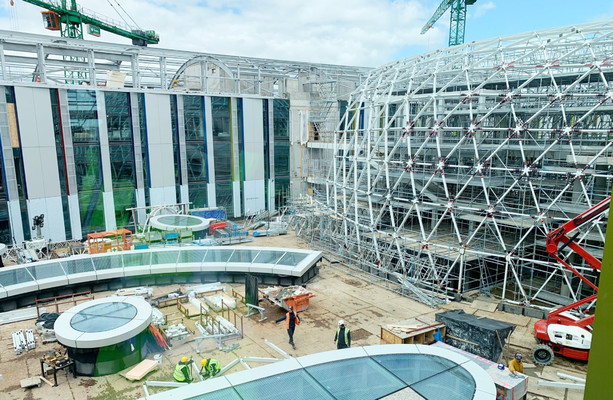 Construction on the long-awaited National Children’s Hospital, located next to St James’ in Dublin 8, is well underway.

The structure has reached its final height, over 95% of the required concrete has been poured, and many of the wards are walkable and not far from being ready for equipment and furniture to be installed.

However, factors like Brexit and Russia’s war on Ukraine that have increased the cost of materials are another hurdle in a project that’s cost has risen again and again since its inception.

The Journal visited the site of the new hospital and its office in Rialto, where demonstration spaces have been designed to show what patient rooms will look like when completed.

Personnel behind the development described the latest reasons for rising costs and the hospital’s new features, as well as what the transition from the existing hospitals will involve and how sustainability was incorporated into the build.

Project Director of the National Paediatric Hospital Development Board (NPHDB) Phelim Devine said that there are “huge pressures on costs and people are aware of it”.

In 2017, the project was forecast to cost €983 million. The following year, Taoiseach Leo Varadkar told the Dáil that it would cost €1.4 billion.

That increased again to €1.73 billion in 2019, while one opposition TD said he believed it was “highly unlikely” that the total cost would be less than €2 billion.

Devine of the NPHDB outlined that the project had accounted for inflation of around 4% – but this year, inflation has soared up to 7% as consumer prices rose at their fastest pace in almost 22 years.

“There are going to be additional costs associated with inflation. There’s other external pressures that are outside our control,” Devine said.

“Covid has impacted the project; it delayed the project and there will be costs associated with that,” he said.

The other pressure is there’s a shortage of resources in the industry. The industry is at peak, you can’t get people, and there’s obviously the big impact of Brexit and Covid and the Ukraine war.

“In some ways, we’re lucky, because we were reasonably advanced on certain things, like the facade, it was all built, [so] whilst Covid had an impact, the programme was delayed, but at least we had the material.

Now, on a global level, Russia’s war on Ukraine has triggered increased fuel costs and complications with international shipping, unleashing a domino effect on construction.

“Steel has gone through the roof, plasterboard has gone up. Everything, every material has gone up, because of the logistics, the cost of fuel, the cost of moving it around – it all comes from different countries. That’s the pressures that we’re facing.” 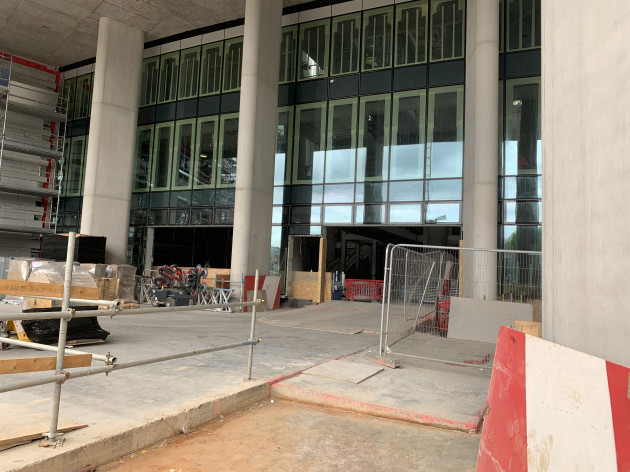 The entrance of the new hospital

Despite the additional stress on cost and supplies, the project is still aiming to finish construction by the end of 2023 and open its doors in 2024.

Before it takes off, the hospital will need to handle the complicated process of moving patients, staff, and equipment from the existing children’s hospitals in Crumlin, Tallaght and Temple Street.

Medical Director Dr Emma Curtis explained that the move will involve a process of “operational commissioning”, which involves staff coming into the hospital, finding their way around, and getting accustomed to the new building and facilities.

“For this hospital, that will be around a six-month period,” Dr Cutis said.

“Then the process of moving everybody is called clinical migration. That happens over a shorter period and there’s a huge amount of planning that goes into that,” she said.

You try to reduce your in-patient numbers. You can control your planned activity – if someone is going to have a complex operation, you wouldn’t do it the week before the move, you’d do it two months before the movie or leave it for a month after.

“You can’t control sick people being sick, so there’ll be a certain cohort of patients in. We’ll move one hospital at a time. We’re working on the moment on that sequence.”

While one hospital is moving, the other hospitals will need to be able to cover any shortfall. 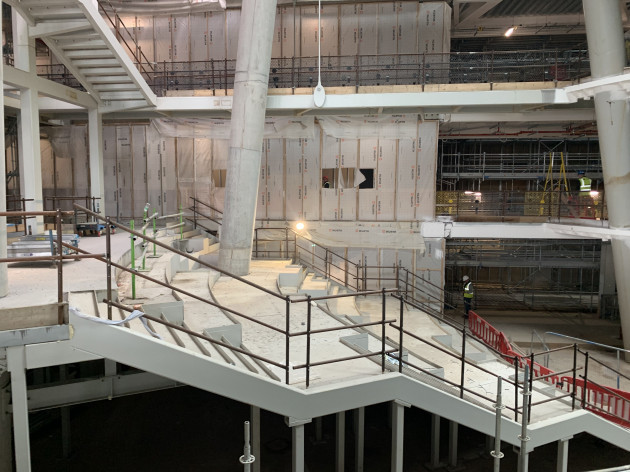 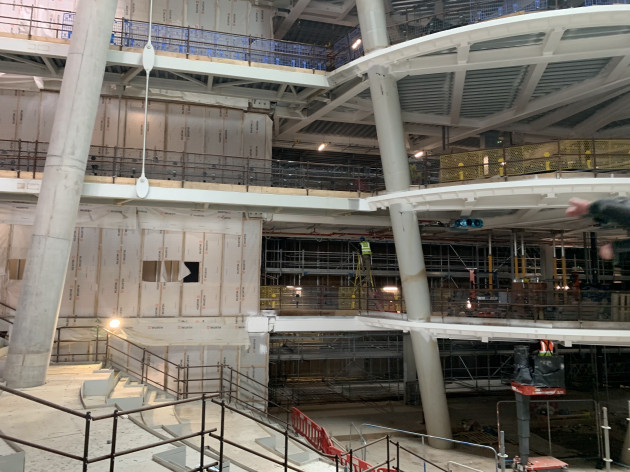 Sections of the main concourse 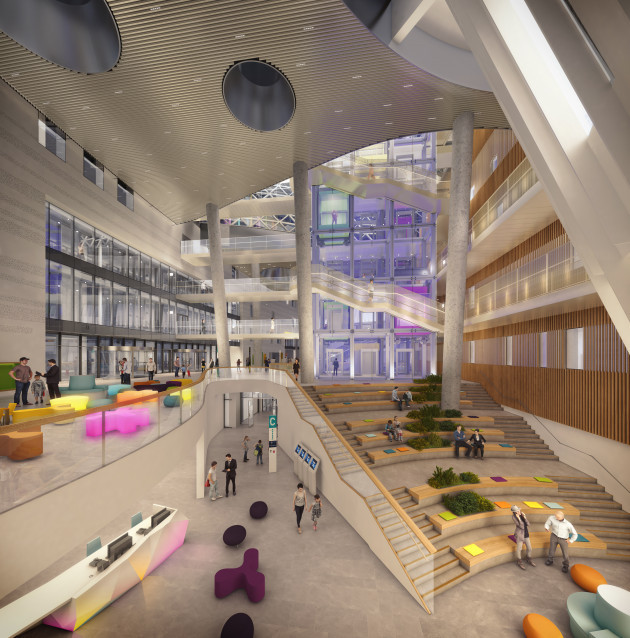 There are child-centric touches throughout the building, from colourful floor markings and eye-level windows in doors to a tablet installed at each bed that can be used for entertainment, education, and ordering food.

Most of the rooms have en-suites and are kitted out with a fold-out couch that parents can use as a bed.

A decision to focus on individual rooms instead of shared ones was debated earlier in the planning process but ultimately was a source of relief when the pandemic underlined the importance of being able to give patients their own space if necessary.

Each section of the building has an outdoor play area in an interior courtyard and the fourth floor will be planted with an extensive roof garden and windows that will bring light down to the main concourse. 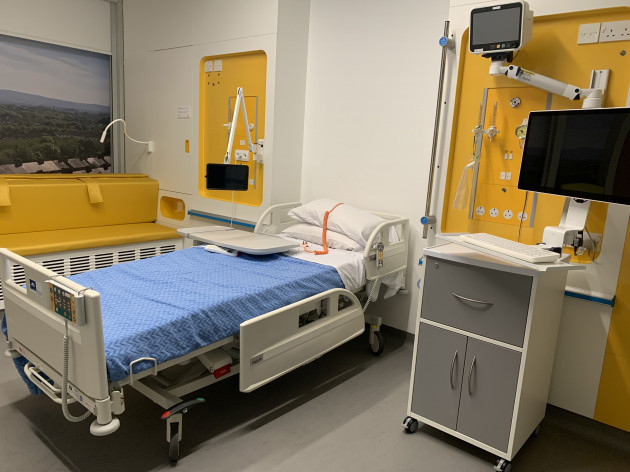 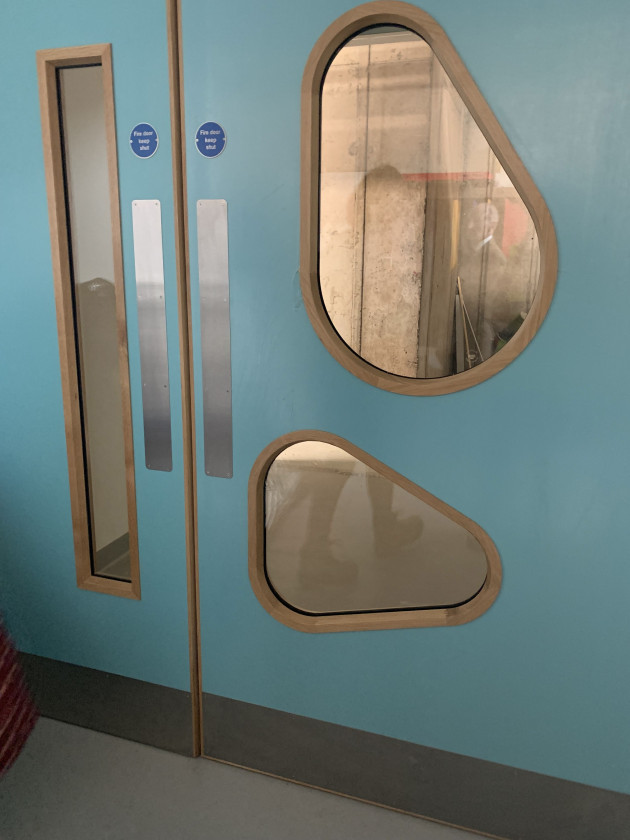 Clinically, all health records will be handled through an electronic system instead of paper documents with the hope that the electronic records will make accessing patients’ information faster and simpler.

And in a first for Ireland, some materials will be transported across the hospital by small robots that will make around 1,400 journeys per day on material corridors separate to patients and visitors.

“They’re a rectangular little unit running on casters. It has a lift, so it would come in underneath, for example, a linen cage, lift it up, and away it goes to its destination. It has its own predetermined paths,” O’Rourke described.

“The hospital is designed around robotics. It’ll head off up its corridor, go into the lift, go up to the ward it’s supposed to go to, there’s a clean hub to drop off and it heads over to disposal to pick up waste returns and come back down to the dock.” 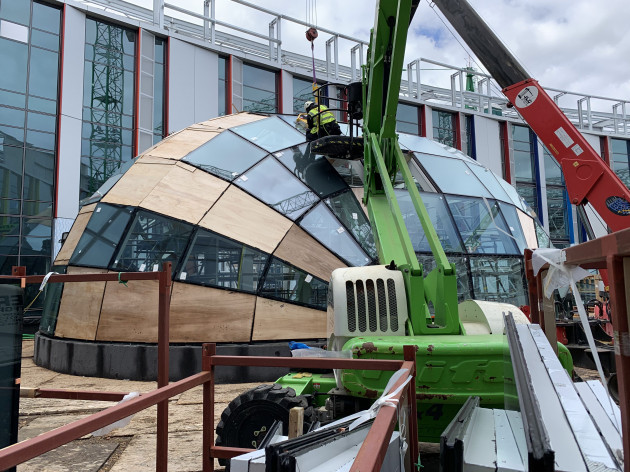 A section of the roof garden under construction

Across the health service, the HSE is due to publish a plan (which was expected to be released in March) outlining how it intends to decarbonise its infrastructure.

Buildings’ energy requirements for electricity, heating and cooling add up to produce significant greenhouse gas emissions and the HSE has acknowledged that its infrastructure needs to become more energy efficient.

The new children’s hospital has received a BREEAM Excellent rating for design, a marker of sustainability in buildings, and governing body Children’s Health Ireland intends to work on securing a BREEAM rating for the hospital’s operations.

Compared to the existing children’s hospitals, the new NCH’s energy usage is set to be 60% to 70% less per square metre.

He said sustainable decisions were implemented “where we had any opportunity at all”.

“[It’s] the same in all of the outpatient rooms. The ones that don’t require special air because of the patients, they’re naturally ventilated, you just open the windows. We’ve modelled all of this through CFD analysis to make sure that people won’t be too warm.”

“We have a combined heat and power unit, so that’s gas-fired. It generates electricity to reduce tariffs.

He said there “were a couple of measures we weren’t allowed do because it’s a hospital”, such as using boreholes to take water directly out of the ground.

“It could have been a bit more, but there are rules we have to comply with. We’re as efficient as we can.”

One measure that wasn’t implemented, but which could be a possibility in the future, is solar power.

“We looked at PV panels, but they just didn’t stack up value for money,” Devine said.

“Because we have a helipad, the biggest area of roof we have is Level Four, but there are down-draughts from helicopters,” he said.

“There’s still maybe an opportunity in the Meadow Garden in the future to do a bit more on solar, because solar is getting better and better all the time, but when we designed the hospital, it just wasn’t stacking up.” 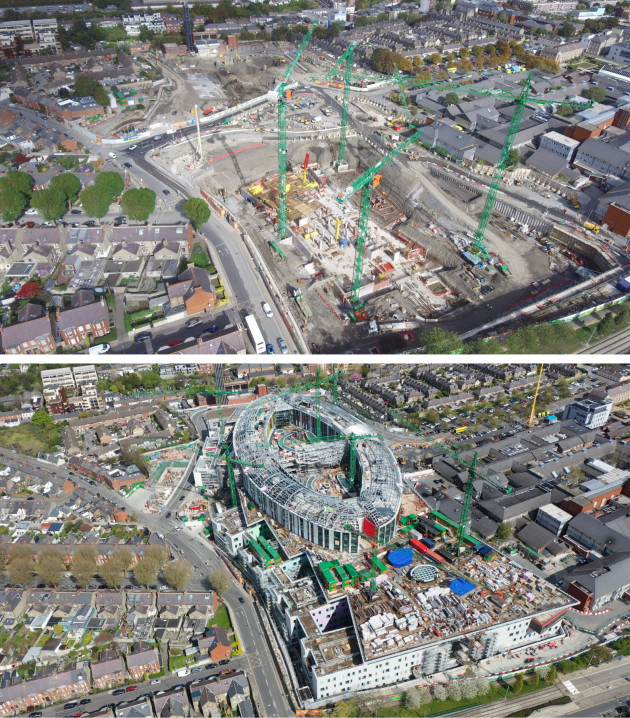