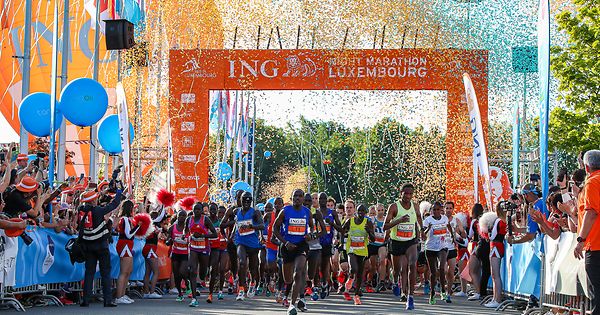 The 2019 marathon getting underway at the Luxexpo

The organisers of Saturday’s ING Night Marathon have denied accusations of racism, after describing the race as an “opportunity for European runners” with no “participation from top-level African athletes”.

More than 12,000 runners are expected to hit the streets of Luxembourg City on Saturday evening for the marathon, which is returning after a two-year suspension due to the Covid-19 pandemic.

While up to 100,000 spectators are expected to cheer on the race, a screenshot from a powerpoint presentation prepared for a press kit drew no applause from anti-racism organisation Lëtz Rise Up, which shared it on social media.

“Does anyone have a sane and serious explanation for this?,” it said, highlighting two bullet points which said the race had “no participation from top-level African athletes” and was an “opportunity for European runners”.

Another anti-racism group, Finkapé, also shared the post, saying it was “alarmed” by the phrase “an opportunity for European runners”, adding that it would raise the situation with the Luxembourg Athletics Federation and the national branch of the World Athletics Federation.

The 10 best times for the men’s marathon are all held by runners from only two countries: Kenya and Ethiopia, according to the Runner’s World website.

The ING Night Marathon said it does not “exclude any athletes”, while organiser Erich François told broadcaster RTL that the marathon was open to all, but that unlike in previous years, the organisers had not formally invited top athletes from abroad, because of the coronavirus pandemic.

“They can come themselves and register to participate, just like anyone else, but we will not be paying airfares or hotel costs,” François said in early May. He later also said there would be no entry bonuses for any athletes. “This is not a decision taken for economic reasons… rather for health reasons. Not everything was clear regarding vaccinations, paperwork to be provided, etc,” he said.