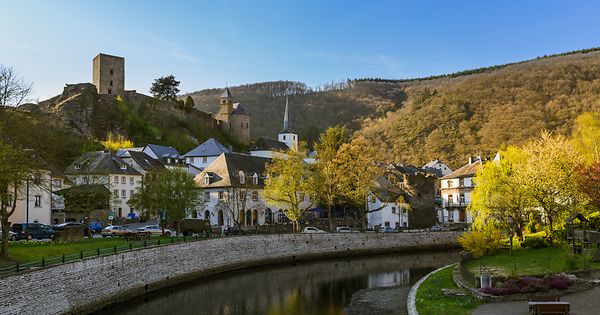 One of the prettiest parts of Luxembourg, set in the Ardennes and the Nature Park Our, is the lake and riverside region of Esch-sur-Sûre or Esch Sauer, from the village of the same name down to Boulaide. The village is located at a meander of the river, and with its narrow streets, feels largely unchanged since the Middle Ages.

Esch-sur-Sûre is dominated by the ruins of a castle that date back to 927 set high atop a steep hill. The first reference to Esch Sauer is given in the third year of Charlemagne’s reign, written around 773. The site was acquired by Meginaud (aka Maingaud) in a deal with Stavelot Abbey which owned the land, and he erected a square residential tower and some buildings for agricultural use. The castle was expanded by the last two counts of Esch, with territories including 19 hamlets and villages.

The first buildings of the castle were constructed during the Romanesque and Gothic periods, with a defensive system added in the 15th century including the round tower. The village was also surrounded by a 450m long and 1.5m high rampart with two defensive towers.

Unfortunately the castle declined from the mid-16th century, although the ramparts were not fully destroyed because private houses were built against them (which you can still see in the lane next to the town hall).

From the mid-19th century, ordinary folk resided in the castle, and when Victor Hugo visited it in the summer of 1871 there were several families living there. The chapel was restored in 1906, but the rest of the castle has remained in ruins.

You can download an app audio guided tour “Mysterious Esch-sur-Sûre” which also takes in the dam, located downstream a kilometre from the village. It’s available on Android and iOS. In addition to providing historical information, it takes in sights including the Loch Chapel, the ring wall, the rock staircase and the castle garden.

The lake or reservoir, created as part of the hydroelectric dam project in 1961, is 1km west of Esch in the Upper Sûre National Park. It’s 380 hectares and whilst it provides drinking water and electricity, it’s also a great leisure area. Outside the main protected area you can swim, paddle board, windsurf and even take a trip on the solar boat (season May to October).

The Burfelt viewing platform, below which is a quiet beach

There are two lakeside beaches at Insenborn, one closer to town, one at the bend of the river. There’s a more secluded one which can be accessed near the Forest House just past the Burfelt viewing platform (which gives fantastic views of the surrounding area). There’s also a beach in Liefrange, and yet another, named Alain’s beach (although not exclusively for him), just outside Esch village and past the dam where the rivers Sure and Dirbech meet.

A few times in the past decade, algae has plagued the lake and river water, and swimming has been forbidden. The water management administration has confirmed that checks carried out this year in swimming areas around the lake, confirm that it’s safe to swim and water quality is at a high level.

To find check if the water quality is OK for a swim later in the year, you should go to the government’s water resource website.

A former cloth factory is now the home of the tourist information centre and the place to buy regional products and woven items. It also houses a small museum (tours can be given in English), which shows visitors the looms, originally used to produce cloth for woollen uniforms, sewn together by the village women. In fact a weavers’ guild existed in Esch from the 16th century. Entry is €3.

Wool woven into cloth was a staple industry in bygone times

The visitor centre houses temporary exhibitions and is open every day except Wednesday (and daily in July and August) from April to October.

There’s also a play area for children to get to know the local flora and fauna, located on the top floor.

Each year at the end of June, Esch-sur-Sûre usually hosts the Night of Legends, with entertainment around the castle and village including legend telling, dancers, musicians, actors, jugglers and fire eaters. Every two or three years the Water-Art Festival brings 130 musicians together to perform classical, rock and pop on a stage right next to the reservoir.

The octagonal chapel of St Pirmin in Heiderscheid is in Neo Gothic style as a reminder of the medieval Christinan era. It was built by Dutch architect Ernst van Koenig in the mid-19th century. The construction was rife with bad luck, with cracks appearing in the church walls just 20 years after it was built, and lateral buttresses were put in to support the building.

The alter, pulpit and statues were made by Luxembourgish sculptor Michael Weiler, heavily inspired by the Rococo style. The wonderful stained-glass windows in the nave were made by Jean-Pierre Koppes from Altwies and were created in 1914. The right side depict St Anthony and St Willibrord, whilst on the left you can see St Cecilia and St Elisabeth. The windows of the choir show St Joseph and the Virgin Mary. The remnants of a mural painted in 1919 shows the Coronation of the Virgin.

Stations of the cross dating back to the 18th century connect Esch-sur-Sûre town to the Chapel of the Cross located high on the hill. A magnificent avenue of lime trees leads to the entrance to the cemetery, whist the Sanctuary of the Holy Cross was rebuilt in 1767. Inside is another of Weiler’s works, carved from limewood, this time Christ on the cross flanked by two thieves.

In Insenborn  you’ll find the St Roch Church, which was built in 1862. The statue of the saint inside was made by sculptor Jean-Georges Scholtus from Bastogne and pre-dates the church.  The building was extensively modernised to make it more welcoming, with light and colourful interiors, and stained-glass windows by Uli Lindow representing the Holy Trinity. The stars in one window represent the seven archangels gathered around the throne of God, symbolised by a yellow triangle.

You’ll find two circular (blue flag) walks starting in the Esch. The first is 8.8km and starts near the Sûre bridge at the rue de Kaundorf. It follows the valley in the direction of the dam and then takes in the Circuit du Lac pathway through the forest along the lake. The second shorter one, is just 4.3km and starts near the tunnel, going across the bridge and following the river past the camp site before heading uphill to Burschenterbësch, and then past the chapel of the holy cross, before heading back downhill again to the starting point. There are more circular walks in Liefrange and Insenborn.

The 37km national hiking trail “Circuit du Lac” gives you the chance to see the lake from several viewpoints and to stop in some of the pretty villages in the area.

A 7km trail, taking about 4 hours starts at Boulaide’s Pont-Misère and leads through its nature reserve. The path focuses on the changes humans have made to the landscape with 21 stations providing interesting local facts. You can get a guide to the walk at the starting point, at the parking lot by the bridge. A shorter 5.5km walk from Baschleiden leads through a meadow, then by a stream and through a forest, to the Hellekessel. Here the stream flows into the reservoir.

The tree root trail leads across the plateau, with beautiful views of the reservoir and surrounding region. The route goes down to the reservoir and then to Liefrange before heading back to Kaundorf. You can follow the tree root symbol for this 8km easy route (taking about 2 hours). In summer, bring a swimming costume as it passes the swimming bridge between Lultzhausen and Insenborn. An Esch-Sauer circular route leads over fields into the valleys of Grondmillebaach and Dirbech. The route is marked with mushrooms, and passes by several stations over a 7km trail.

Families might like to try the 4.5km water fairy trail, which is marked by a water droplet symbol, and leaves Esch for the Grondmillebaach valley returning to the start point via Pëtzbech. The stations en route are designed to help you use your five senses. It starts near the Dorfmitte bus stop in town. The 5.5km court jester trail starts near the small bridge in Esch village, and takes the old stairs to the castle complex where the path leads into the forest. Following a long climb, you are treated to beautiful views of the reservoir, after which you can take stairs to a narrow path that leads into the valley and back to town. Expect to take about 2 hours to complete this trail.

The sculpture trail at Lultzhausen showcases the work of six international sculptors who sculpted stones around the reservoir. The results line the path that leads through the slope above Lultzhausen to a view of the reservoir. The 4km trail starts at parking lot N27. A short 2.8km discovery trail Waassersenneswee traverses the brook between Lultzhausen and Esch, with a focus on the element of water highlighted in themed stations along the route, designed to get you to use your senses. It starts on the CR314 between the two towns.

The Heichseelgaart in Heiderscheid has a giant swing, tyre swings and a children’s assault course plus a climbing wall.

A mountain bike trail starts in Bavigne and travels a 35km circular route via Boulaide, offering astounding views over the Upper Sûre Lake. It leads to the Häregaart in Bavigne, which was a former priest’s garden with terraces affording panoramic views over the Ardennes.

The MTB trail climbs a non-tarmac lane which is passable in all weather conditions, then crosses the forest before taking the road leading to Baschleiden, before continuing in the forests that surround the lake. The final stretch passes through the wetlands near Tockemillen to the Fatima chapel in Harlange before returning to the start.

A more strenuous 36km trail starts at the town hall in Goesdorf. It takes in the 2.5km geological path Op der Spur vum Antimon which has information panels about the region’s geology and mining. Again, expect wonderful views of the valley and a few stiff climbs.

You can find a map of both routes to download here.

The Gourmet & Relax Hotel De La Sure, is both a hotel and restaurant. If you stay overnight, you can partake of the hotel’s sauna, hamman, hot tub, and gym plus it’s also an eco-hotel. Luxury rooms have a steam cabin and hydromassage shower. The restaurant, which also has a wind-sheltered terrace, serves French cuisine using locally-sourced Luxembourgish ingredients.

Hotel le Postillon, just in front of the castle has double and triple rooms, whilst Camping Bissen on the banks of the river at Esch has chalets and riverside cabins. Camping Berkel in nearby Bockholtz has safari tents, and there is a Youth Hostel at Lultzhausen. You’ll find another campsite in Liefrange, and several others dotted around the area (where you will need to take your own tent, camper van or caravan).