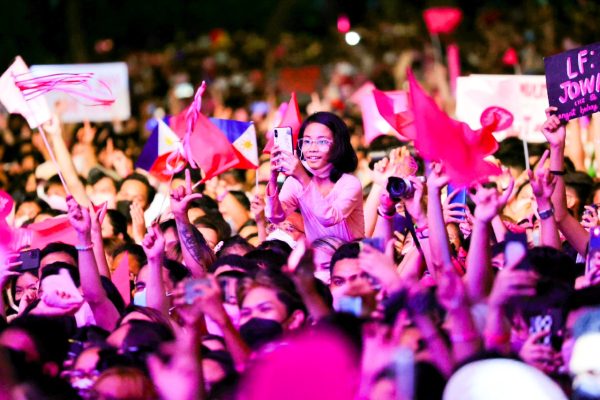 At this month’s election, the vibrant campaign of Vice President Leni Robredo offered some glimmers of hope for the country’s democracy.

In 2016, the Republic of the Philippines saw the election of a populist president who not only played with authoritarian rhetoric but whose six-year term has been marked with extrajudicial killings, an investigation by the International Criminal Court for human rights violations, and the passage of an anti-terror law which itself sparked terror among many Filipinos in the middle of the country’s COVID-19 lockdown. 2022 has affirmed the country’s democratic backsliding, with the May 9 presidential election resulting in a landslide win for the son of a world-renowned dictator and his running mate, the daughter of the incumbent president. Despite this, the country can still look forward with hope, as a new civil society emerges from the mire.

Democracy has long been a political tool in the Philippines, a young polity preyed upon by oligarchs and despots, where political parties seem to lack clear cut ideologies. Each party chooses either to be
“moderate liberal” or “moderate nationalist,” all the while advancing populist platforms instead of policies that reflect party identities. Oligarchy produces a paradox where electoral fairness is enshrined in the constitutional qualifications of candidates, but power passes among members of established political dynasties. At the same time, public discourse is sullied with the proliferation of fake-news and rampant troll activity. Red-tagging is used to silence the parliament of the streets while populist rhetoric captures the masses.

Fearmongering from the previous six years of Duterte’s bloody war on drugs, human rights violations, and the arrests of dissenters during the coronavirus pandemic did not completely silence civic participation. Leni Robredo, in her time as vice president, worked through the difficulties of the times to actively help Philippine society. Now, despite her presidential election defeat, she continues to do so through Angat Buhay (Uplift Lives), a non-government organization (NGO). This immediately drew flak from mysterious online trolls, who embroiled the NGO in red-tagging and accusations of forming a shadow government. On the contrary, the truth of Angat Buhay can be traced to Robredo’s six years of efforts to uphold the salus populi, given that her office has been isolated by Duterte.

In the Philippine Constitution, the position of vice president is a seat-filler, awaiting appointments from the president or awaiting to succeed the post if such a time arises. Further denied a role in the counsels of the president, due to her vocal opposition to many of his policies, Robredo continued to advocate for human rights and participated in helping areas in need. The words “Angat Buhay” originated in her victorious run for the vice presidency in 2016, when it was her promise to the Filipino people. Helping uplift lives in needy communities across the country, Angat Buhay became the focal point not just for programs of the Office of the Vice President but also of voluntary civic activities among many Filipinos, such as the provision of aid and assistance to the victims of typhoons Yolanda and Odette, struggling farmers, and the urban poor.

Tied to this advocacy is the lugaw (porridge) moniker. A cheap but nutritious Filipino comfort food, this dish was distributed by Robredo’s team in depressed areas and those affected by calamities during her time as vice president. Soon her supporters across the archipelago began conducting independent fund raising with the sales of lugaw to help contribute to her program for housing those in need. Supporters from opposing camps used “Leni Lugaw” as a means of bashing and bullying the vice president and eventually as a taunt during her presidential campaign. She and her team embraced the “lugaw” moniker since it was born as an advocacy, and just as this rhetoric has evolved, Angat Buhay evolved into an NGO. When most candidates sulk or protest after an election loss, Robredo instead thanked her supporters and transformed her Angat Buhay campaign into a functioning civil society organization for the purpose of committing to the promise of her campaigns – helping fellow Filipinos.

The turn towards democratic decay in the Philippines may yet be reversed. This year’s presidential elections may have augmented the 2016 democratic decline; however, any politician in the national government with a predilection for authoritarian practices will have to dance within the rules of the Philippine democratic system, and contend with the democratic ethic of the Filipino population. To do otherwise or to saturate the space with draconian policies further suppressing civil liberties would tag them as despots, something that no fake news can cover up. It is this constraint in the system which allows civil society to grow amidst the overall decline.