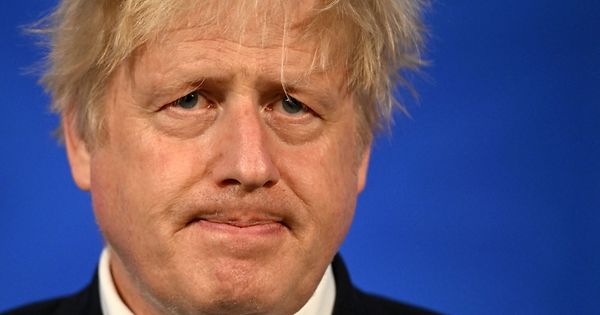 Boris Johnson urged more military support for Ukraine as it battles Russian forces, including sending advanced weapons such as Multiple Launch Rocket Systems that can strike targets from a far longer distance.

The British prime minister aired his support for more arms for Ukraine as he pushed back against the idea that, with the war now in its fourth month, President Volodymyr Zelenskiy should focus instead on reaching a peace deal with Russia that could see Ukraine cede territory.

“How can you deal with a crocodile when it’s in the middle of eating your left leg?” Johnson said in a Bloomberg Television interview on Friday, when asked about the prospect of negotiating with Russian President Vladimir Putin. “The guy’s completely not to be trusted.”

Ukraine has been asking nations to supply it with the MLRS as it grapples with advances by Russian troops in the eastern Donbas region. That request has been met with some caution on whether it would bring allied nations closer to direct confrontation with Russia. While the MLRS would be more effective against Russian artillery, its deployment would add to the risk that missiles land over the border in Russia, whether intentionally or by accident.

The MLRS “would enable them to defend themselves against this very brutal Russian artillery, and that’s where the world needs to go,” Johnson said. The prime minister said Putin’s forces are “continuing to chew through ground” in the Donbas region, making “slow, but I’m afraid palpable, progress.”

Ukrainian officials have expressed concern in recent days that as the war goes on they will be pushed to negotiate a cease-fire with Russia including agreeing to cede territory in the east. Zelenskiy is among those who insist Ukraine will not give up any territory in order to stop the fighting.

“Pressure on Russia is literally a matter of saving lives,” Zelenskiy said in an overnight address. “Every day of delay, weakness, various disputes or proposals to ‘appease’ the aggressor at the expense of the victim is new killed Ukrainians. And new threats to everyone on our continent.”

Johnson said it is “absolutely vital that we continue to support the Ukrainians militarily.” Yet he also ruled out using the British military to help clear mines from Ukrainian ports, saying only that the UK would work with international partners to help Ukraine do it.

Before Putin started his war in February, nations including in North Africa had relied on Ukraine for supplies of wheat, corn and sunflower oil. But grain is now sitting in silos, with shipping routes blocked in the Black Sea. Pressure is building on the US and other allies to take action to prevent the situation fuelling world hunger.

Putin has said he’s willing to facilitate exports, but only if sanctions on his country are lifted – a condition rejected by the US, UK and others.

Nations including Estonia and Lithuania want a system where grain freighters are escorted through the Black Sea by warships from allied nations in order to get Ukrainian exports flowing again. That requires mines around the ports to be cleared first, and for Russia to agree to allow the vessels safe passage.

It would also require Turkey’s support: The 1936 Montreux agreement allows Turkey to regulate maritime traffic through the Bosporus strait to the Black Sea during peace and wartime alike, which means it can refuse to allow navy vessels to enter.

Johnson said he had a “good conversation” Turkish President Recep Tayyip Erdogan in recent days. “I won’t pretend to you that there’s an immediate solution that we can just do with a click of the fingers,” he said.

A UK official said this week there are currently no plans for British warships to be used as escorts for grain freighters.

The British prime minister has tried to put his government at the forefront of international efforts to bolster Ukraine’s ability to resist Russia’s aggression, and has built a personal rapport with Zelenskiy.

That approach has worked for Johnson on multiple fronts, allowing him to rebuild some international relationships that were damaged by the UK’s split from the European Union and taking the sting out of moves to replace him by some members of his ruling Conservative Party.